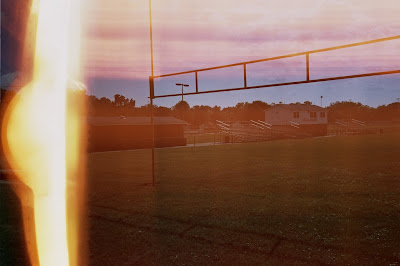 I live in the cool neighborhood in Akron. I love the building that I live in. It's super old, really big, and affordable. We've been in the same place since 2015.

I live in between two major arteries, which lead to the three hospitals in the area. I hear sirens at all times of day, every day. I can't remember the last time that I didn't hear sirens around here. I also hear gunshots regularly. I live a block over from a street with a lot of shootings, and less than a mile from where even more happen. At night, when there's less noise from street traffic, it sounds like fireworks.

This neighborhood is loud, period. There seems to be a neverending stream of people who like to scream as they're walking by our building. There's one guy who sings so loud and out of key a few times a day who has become my favorite. The guy who screams about the sonofabitch who killed his brother is not my favorite. The road noise is so loud that if we're watching tv, we have to turn it up loud.

I live a few blocks from bars, restaurants, and a record store, but this area is generally not walkable. It's not safe. There was a rumor of more cops patrolling the area, but this city is in the middle of an opiate crisis, and people are poor. Getting robbed around here is common. People's cars are constantly broken into, so you have to remember to lock your doors. If we didn't live in an upper level of an apartment, I would not live in this neighborhood.

I live a mile and a half from downtown. Due to traffic and various bike lane/road narrowing projects, it takes me about 15 minutes to get anywhere down there. I generally only drive through downtown on my way to my doctor's office. We spent more time downtown in warmer weather, but since the construction started, we just go someplace else.

It is no longer shocking for me to see someone being revived on a sidewalk. I just saw this yesterday. I've seen  so many people in this town in various stages of overdose that I'm mostly desensitized to it. But it's still a huge fucking bummer when I do witness it. I think everyone in this town knows someone who has died from an overdose.

Akron has a lot of homeless people, and nowhere for them to go. There have been multiple encampments that the city makes sure to come in and shut down, with little to no options for where these people are to go next. I occasionally see tents in the woods as I'm driving. I would never report them. I'm not a narc, and I know that these people for whatever reason have nowhere else to go. The city is busy ripping down buildings and making large plots of empty land.

Akron's job market is horrendous. I have worked office management jobs for most of my career because there's really not much else to do around here that pays well. If you're ok with soul sucking call center work or back breaking low paying factory work, you'll be able to find it in the suburbs, on the bus line (which may or may not run when you need to be at work).

Akron's school system is awful. I'm never having kids, so it's a moot point for me. But as a person who went to a shitty Akron Public School, I wish that the kids now had it better. But they don't. Schools here have been closing and consolidating like retail operations.

The weather here absolutely sucks. Our winter has been fairly uneventful. It will get cold for a few days, and then the temperatures will shoot back up into the fifties. I have a bunch of allergies, from tree pollen to various weeds that grow, well, like weeds everywhere in this town. The lack of sunlight and lack of things to do makes for some real stir-crazy, sad people.

-it's cheap to live here (for now. This seems to be slowly shifting)

-since it's cheap, it's a good place to hide out and get your shit together. I've been doing just that for the last two years.

-Akron is an easy drive to many big cities, where things actually happen! From Akron, I am:
But what does it say about  a city when its inhabitants cite the fact that it's really easy to leave here as one of the reasons that they like living here?

I hope one day to leave this town. I'm currently still here because it's very hard to rebuild your life after having a nervous breakdown. I'm still recovering and building the life that I have always wanted to live. Also, my family is here, and my mother has been in ill health for the past few years, so I didn't want to pick up and leave. But in my 40+ years here, I have never once seen Akron thrive. I was born after the rubber jobs started leaving, and anyways, nobody in my family ever worked in the rubber industry.

There's always these talks of the Rubber City making a comeback, but thus far, it hasn't happened. And to be honest, I don't know if I care that it ever does make a comeback. But for now, I'm stuck here, in this magical space where I fell in love and had some shows and parties.