When I was a kid, I was obsessed with Pee Wee Herman. On Saturday mornings, I would wake up specifically to watch Pee Wee's Playhouse. Pee Wee was everything I wanted to be: loud, energetic, and unapologetically himself. His friends were all weird and cool, and his house was colorful and wacky. When I was in sixth grade, I was Pee Wee Herman for Halloween. It was going to be my last Halloween parade, so I decided why not have fun with it? I bought a grey suit from the thrift store, slicked down my hair, and went to school in what was the most nontraditional Halloween costume a 12 year old girl could come up with. 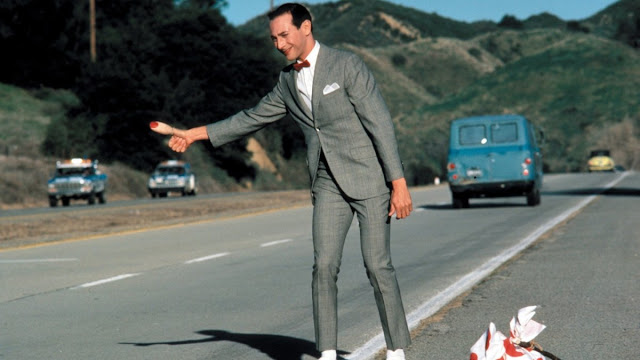 My family always had cable, and we always had HBO and Showtime. Back then, the movie stations would get a few movies each month, and play the everloving shit out of them. As soon as Pee Wee's Big Adventure hit HBO, I must have watched it over 100 times. I loved the whimsy and the unpredictable nature of taking this great road trip with nothing in mind other than getting his bike back from FRANCIS. He meets people like Large Marge and the convict who he played house with: 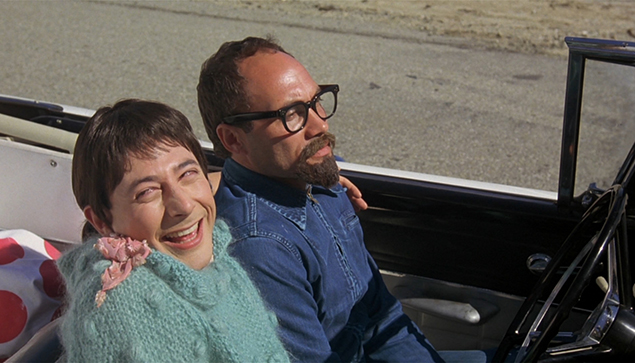 We didn't have much money growing up, so my family did a lot of road trips. A lot of them were to amusement parks, because Ohio has a ton of them. I spent a lot of time with my cousins. On weekends that Geauga Lake had carload specials, my grandparents would load all six kids and our moms into their RV and we'd go ride roller coasters and water slides all day, and eat a picnic lunch together.

My parents got divorced and my dad would take us on weekend trips to Niagara Falls or other touristy areas within a few hours of home. I always wanted to go to a dinosaur park, just like Pee Wee did with Simone. I was in my teens at this point, so I wanted to sit in a dinosaur's head with someone I loved, and luck had it that I had also started taking French, so I could be Simone in said dream scenario. Au revoir, Pee Wee. 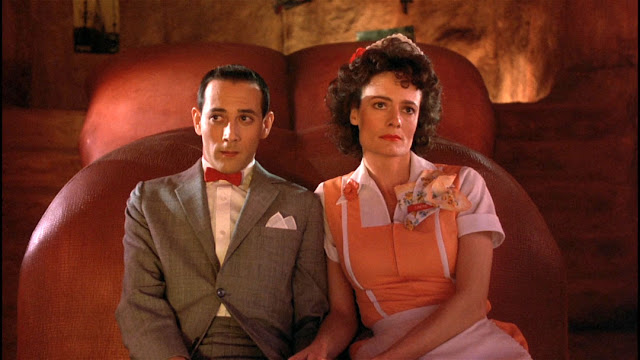 Years passed and I grew up and got into punk rock. Sticking to my roots, I started taking road trips, and eventually planes, trains, and buses became involved. I'd travel many hours just to spend a few hours in a dark ass club, singing along and soaking in the energy of a live show with a bunch of strangers. I would have to print out directions from Yahoo Maps in order to get to my destination. I visited NYC often, and I learned the subway system. I got comfortable pooping in truck stop bathrooms and eating gas station snacks and considering it a whole ass meal. I loved the road. I still do.

Even in some of the darkest times in my life, I have traveled. I've done roadtrips by myself. I've always gotten out of the house for music, and I love the hotels and restaurants and shopping along the way. Going to see bands (well, one band) saved my life in a lot of ways. I put in 1,200 miles one long weekend alone, and it was the beginning of me knowing that it was time to get my shit together, no matter what, no matter how.

My sister and I took epic road trips together. She used to tag along with me to shows in different states. We'd sing along to the radio, and she'd swear at cars. I've had many evenings of trying to wrangle her into an Uber, and pray that neither one of us threw up. Our trip to Las Vegas was incredible, and I'll be forever grateful that we were able to have that adventure before she became a mom.

I took various road trips with various men over the years, but there was always something off about traveling with them. A couple of them refused to take public transportation when we would visit large cities. I dated one guy who wouldn't even walk across town, he would always get a cab or Uber. One of them was perfectly content never leaving Ohio. And then (as most of my stories go these days), I  met Kurt.

We took a roadtrip together on one of our first few dates. We went to Pittsburgh to record shop (my first trip ever to Jerry's Records) and to see a band play. The show ended early, so then we somehow decided to take the Duquesne Incline to the top of the hill. We went and looked out on the observation deck, and then wandered around the surrounding neighborhood. Most places were closed or vacant, but we ended up finding a bar to duck in and have a drink together. The bartender went from cool old dude to sneaky racist in about 30 minutes, so we took off. We rode to the bottom of the hill, got in the car, and headed for the now closed Steel Trolley Diner, in the middle of nowhere, Ohio. I think we got home at 4am and crashed.

I know it's so cheesy when people say things like, "and that is when I knew I was going to marry that guy," but I will say that night did put him in the category of man who will likely capture my strong attention for a very long time.

It was fitting that for our honeymoon, we took a road trip together. We got a hotel in Gatlinburg, the honeymoon suite. It had a heart shaped hot tub and mirrors on the walls. We drank half a jar of moonshine in there and talked loudly about how much we loved each other. Gatlinburg and Pigeon Forge were full of touristy stuff, but we didn't have time to stop. I'm really hoping to get back to Gatlinburg.

On our way home from Nashville, we took a stop at a dinosaur park. It was overpriced and the paint was chipping off of the dinosaurs, and the gift shop was chock full of souvenirs from every era of the park. We found an abandoned haunted house across the street. It was magical.

Fast forward five years and thousands of miles together. We just came back from one of my favorite trips to date. We spent three hours in a construction dump, photographing decaying statues. We drove up crazy mountain roads in West Virginia to see a private collection of large advertising statues. We went to a terrifying buffet in Virginia Beach. I hit my second dinosaur park. My husband took this picture. I remember looking out at towards the road, at the back of the Dinosaur Land sign, and smiling. It was a moment of satisfaction knowing that I had made it. I found my zen in that well loved little dinosaur park. 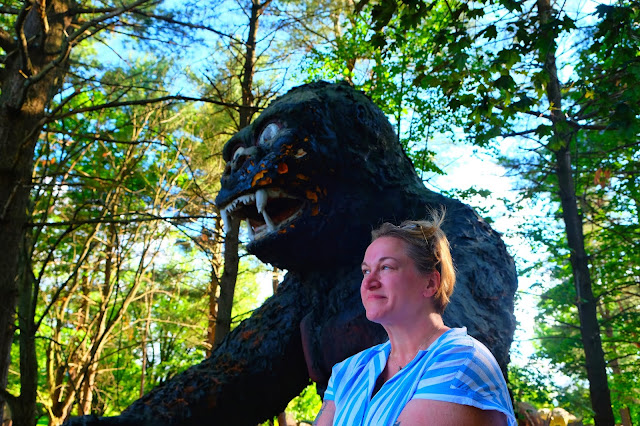 I'd like to invite you into the backseat of some of our travels. I plan on writing more here, and seeing more things this year, too. Next weekend, we're headed to Chicago to see people who make my heart feel full, and to Detroit for more of the same, really. There will be malls and statues and abandoned things to see along the way. We will discuss our rental cars, our hotels, and where we got the best gas station snacks. We'll share our most listened to jams, and whatever wonderful musical project we've cooked up in the wee hours on the road. We'll talk about what local beers we decided to bring home with us. I'll talk about my feelings, i'm sure, because on the Virginia leg of this last trip, man, I had some B I G  F E E L I N G S while we were there. Phew.

Buckle in, we've got some places to see, and some shit to do. 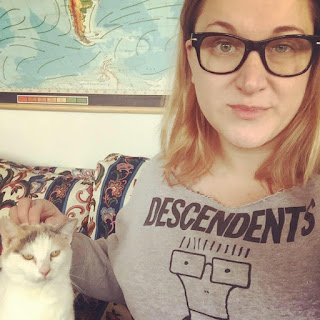 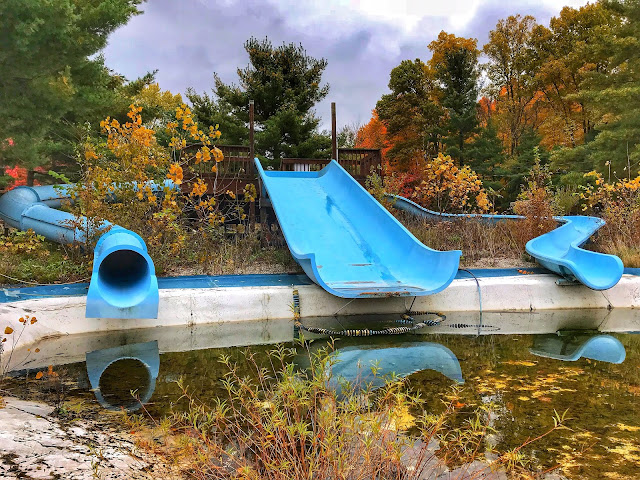